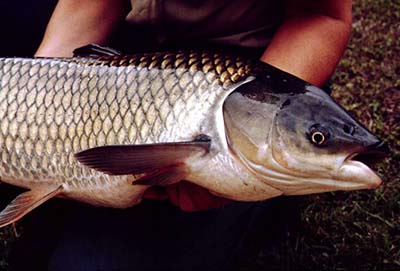 The effects of acclimatization to our amura, descended from the group of East Asian herbivorous fish, must be assessed as overwhelmingly positive. This fish has become an invaluable ally in keeping the reservoirs in good condition, contributes to a significant increase in the efficiency of fish ponds, and it is the favorite of anglers. Not only as a diversion for fishing – the most attractive thing is the vision of colossal specimens. It was a really great idea, to bring amur to us!

Take, ordinary at first glance, the carp fish are similar to chubs like the "brother."”. It differs from him in the shape of the head with a wide and long flat forehead, very low-set eyes and the lower position of the mouth. The tail body, more massive than that of the chub, is also characteristic. The abdomen is lined with black lining. Amur coloration is basically the same as that of chub, only the fins are less colorful.

In its natural habitat – in the Amur basin and in the great East Asian rivers – it is basically a reophilic species. He made himself at home in the rivers, post-gravel workings, in all types of water reservoirs, in wider drainage canals with a depth of at least 0,5-0,7 m, and everywhere there, where it can prove itself as an irreplaceable biological liquidator of excess water vegetation. In short – likes a space with lots of aquatic plants. In practice, you can count on it, that grass carp will also work well in any type of water suitable for carp; a combination of these can even be recommended, the relations between these fish are exceptionally harmonious, even in a sense, simply symbiotic: grass carp disinterestedly helps the carp in this way, that it cleans the water space of excess plants, and what's more – contributes to the development of natural food through intensive fertilization. But it doesn't require much – enough for him, that he will occasionally eat food intended for carp.

Amura can be characterized as a fish, just like carp, thermophilic. Numerous observations indicate, that he is, however, willing to compromise. Turned out, that in winter it does move to deeper layers, but does not indulge in a typical winter nap; sometimes it takes food even when the water temperature is very low (5-6 °C).

Thanks to his Asian nature, modesty and adaptability dominate, you can count on its adaptation also in harsher climatic conditions, with this, that the price may be the inability to reproduce.

In his youth, he feeds, just like other fish, the smallest plankton and small animal food in general, after reaching a weight of 0.2-0.3 kg, it begins to eat plant food, and adults are exclusively herbivores. As long as he has a choice, prefers soft aquatic plants, and its diet can be described as selective. When needed, it is content with the young parts of hard water and coastal plants, and ultimately eats even thicker blades of grass. At optimal temperature - for grass: 20-28 °C – is able to consume a daily amount of plants corresponding to its weight. Thanks to this, it grows relatively quickly, reaching in 1. age (in our ponds) 10-25 g, w 2. year 300-500 g, w3. years even 1 Kg.

The annual increase in adult grasslands varies depending on the type of water 1 into 2 or even 3 Kg, maximum weight in Slovak waters 15-20 Kg, then they achieve over 1 m in length (in East Asian conditions there are specimens weighing more than 30 Kg).

Speaking of the adaptability of amur, one should also remember about the other side of the coin – these fish readily get used to the better food and are easy to chill. In the waters, where the fish are fed (this also applies to baiting) gladly accepts the invitation to the richly set table, no matter if animal food is served (earthworms, larvae, fish fillets) or vegetable (maize, sharps, bread, seeds, cakes).

On the plus side, you also have to save this, that it does not react to temperature fluctuations, moon phases, wind direction and similar factors. This obviously adds to its value for fishing. It is also necessary to emphasize its feeding activity in the early evening hours, and also at night. Our conditions are not conducive to the natural reproduction of grass carp, which excludes the possible risk of its unwanted expansion.

Question, where amur can be found in our waters seems premature. A widespread shortage of its suitable fry (pieces weighing an average 0,5 Kg) orders to give priority to the biomelioration goal when restocking; the fishermen's needs must be regarded as secondary. In spite of all the paeans in honor of the grass carp, one should not be discreetly and carefully consider the situation when stocking, so as not to lose control of it. You can predict (and this is confirmed by the results of the catch) its presence in practically most of our larger bodies of water.

It is important to, that we can consider grass carp as a native fish and we must learn the most effective methods of catching it.