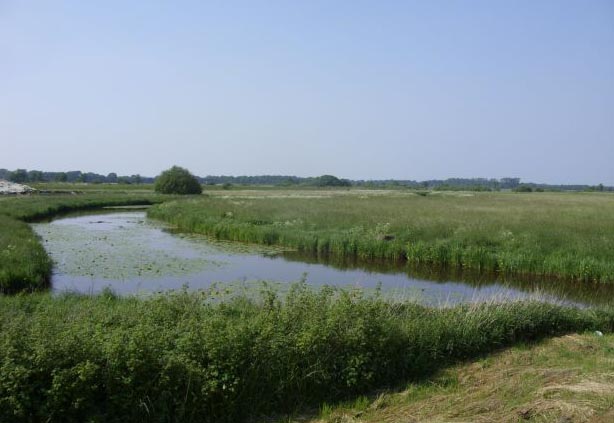 Oxbow lakes may arise artificially as a result of the regulation of meandering watercourses, they can also arise naturally. They are part of the original watercourse, insulated from the main bearing by the dikes, therefore only groundwater fills them (with the mother river they form "connected vessels”).

In the first years after their formation, their fish stock is identical to that of the mother watercourse, therefore, various groups of fish are represented in them. The effects of the change in the original water regime are very noticeable in the change of the composition of the fish stock in the oxbow lake.. Flowing water species are losing their proper habitat: they vegetate under changed conditions, as a rule, they cannot reproduce, and their numbers are gradually declining. The species are gradually taking over a decisive role in shaping the cast, who like stagnant water and find the right conditions for spawning in it. Only phytophilic fish and those with more modest requirements can live here, rubbing on aquatic vegetation.

At first, the productivity of oxbow lakes tends to increase, supported by a gradual influx of nutrients, under the influence of which an organic layer of silt forms at the bottom, and in connection with it, vegetation appears. In the first phase, we have a balanced and favorable oxygen balance in these waters, the conditions for an intensive circulation of nutrients in the water are also favorable. Over time, these relations begin to deteriorate and the productivity of the oxbow lakes gradually declines. It is related to putrefactive processes causing oxygen deficiency. Of course, this also affects the composition of the fish stock: more demanding species of fish are gradually dying out, until finally their existence becomes completely impossible. In this way, the stocking composition is reduced to a few of the most resistant species, i.e.. lina, crucian, piskorz, etc.. The entire described process is completed by the excessive spread of lush vegetation, which covers ever greater tracts of oxbow lakes. Eventually the water may become completely overgrown; In this way, an oxbow lake that is shallow completely loses its economic value.

The depreciation process of oxbow lakes could be avoided by continuous or seasonal "flushing".” Presumably, due to the flushing regulation, the breeding value of the oxbow lake could be significantly increased, and most of all, the risk of choking would be eliminated.

The possibilities of economic use of oxbow lakes in practice are often overestimated, which is manifested in excessive stocking. The actual breeding value of these waters is very low, which we can easily see, for example, by examining the intensity of fish growth.