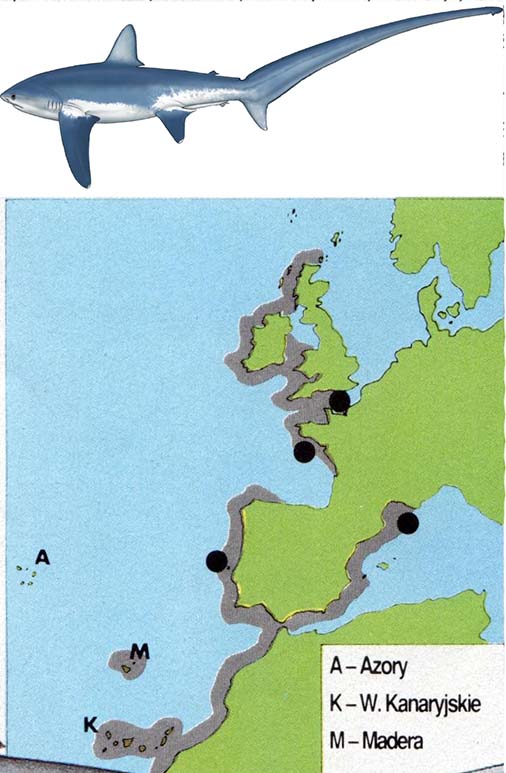 Representatives of six species of sharks (“Class above 100 kg”) they are feared on the Atlantic coast of Europe – from Madeira to the North Cape. The fishing grounds for these fish are reachable after a few hours of flight by plane. All these species of sharks, even adolescent to 2 tons of polar sharks, can be caught with a fishing rod.
At the beginning, I present the heroes of this text – 6 species of large sharks: blue, polar, sea ​​fox, hammer, porbeagle and mako, that is, the mackerel shark.
Those are, without a doubt, rulers of the Atlantic and are at the very end of the food chain in the world of fish. Everything, what only moves in water, should respect these predators. 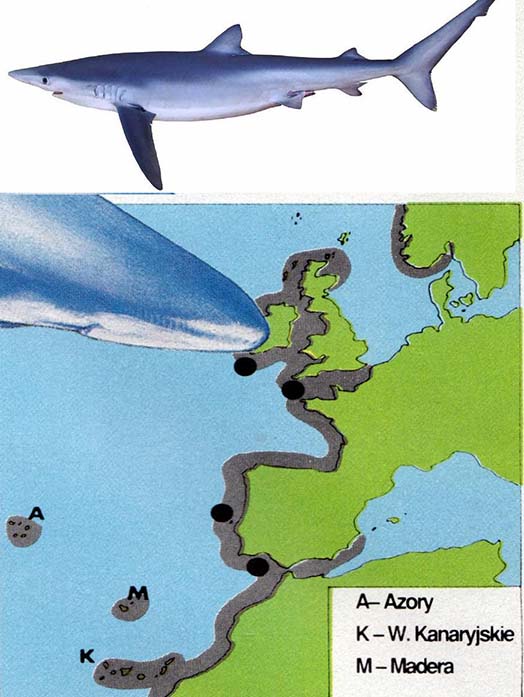 O rekinie młocie, blue and mako sharks are known, that when provoked, they can attack people as well. Provoke, in the case of a shark, it amounts to irritating his senses, activating aggressiveness. Sharks already notice all unnaturally moving organisms in the water from long distances. In this way, it attracts sharks when caught or hit by a crossbow arrow, moving in an unnatural way. In addition to visual stimuli, vibrations carried by water and the smell of everything also have a stimulating effect, what may be "edible”. It happens. that large sharks accompany boats at sea. They are attracted by kitchen waste thrown into the water or by the vibrations generated by the propeller. Various things have already been found in the stomachs of such sharks: jute sacks, tin cans, bones and leftover vegetables. All of this was swallowed in great haste. Рекином, or rather their stomachs, this type of "treats" absolutely does not hurt. Thanks to the very strong stomach acids, everything is thoroughly digested. In normal cases, sharks digest porpoise skeletons, seals and small dolphins and the scales and bones of whole fish. Large gains are torn apart with very vigorous shaking movements. One look into the shark's mouth makes sure that exactly, that this fish is able to cope with any prey.

Sharks: mako, sea ​​fox, Porbeagle and hammerhead are nicknamed "wild four" near our shores. They show such a great temperament in gaining food, with respect among anglers. Due to their bravery, they are wanted opponents.

This mainly applies to the mackerel shark. In his passionate body, the blood temperature rises above the temperature of the water. It gives him extra strength, when being towed. The very fact makes him redoubled, that he cannot swallow the bait with the hook, because the action of the rod and the working reel prevent it. He's trying all ways to escape, sudden turns and quick descents into the depths. Unable to cope otherwise, it gains speed rapidly and throws its several-hundred-kilogram body high above the water. The presence near the ship makes absolutely no impression on him. There are known cases, in which the furious mako shattered the yachts as they fell into the water, causing them to sink. Moreover, deliberate attacks by these sharks on fishing boats are also known.

Closest related to mako, porbeagle, it is not inferior in bravery and endurance. However, there are no known cases of his jumping out of the water or deliberately throwing himself at people.

This "less" aggressiveness of porbeagle sharks may be related to the attack by these large sharks, living in the North Atlantic, mostly small shoal fish, like mackerel or herring. Then a few sharks circle the sharks of these fish, forcing them to tighten their formation. You must see such an attack with your own eyes. It is an unforgettable spectacle. The high dorsal fins of the rushing sharks emerge above the water surface, and the shoal of fish brought to a panic causes, that the water begins to "boil."”.

Scenes like this can be observed mainly in the vicinity of Padstow, just off the west coast of Cornwall in the south of England, and in the waters of the west coast of Ireland, mainly in the Cliff of Moher and around the Aran Islands. The longer sustained south-westerly wind pushes small species of fish and stalking mackerel towards the shore. Their retreat towards the open sea is closed by voracious herring and then a pogrom takes place. South of Moher, between Ennistymon and Kilkee, in such situations, you can catch sharks from the shore. Porbeagle expeditions are practiced primarily in Cornwall. West of Plymouth (South West of England) from the village of Padstow and the surrounding area, smaller fishing ports, Often the boats go out to catch these sharks. They are caught, at an average distance from the coast, at depth 7-10 m. Mackerel when used as bait can almost always induce a bite, not even a feeding shark. Another, a very promising hunting ground for porbeagle sharks, there is a site near Sumburgh-Head – the southern tip of the Shetland Islands.

On the other hand, the fisheries of the mackerel shark are little known, who belongs to the loners who live in the open sea. One such place, away by 15 nautical miles from the Portuguese coast, is located in front of Sesimbra. On the Algarve coast, in the south of Portugal, every year it is also possible to catch a specimen of this fish.

The third of the "wild four."” there is a hammerhead shark. He is a worthy opponent of the angler and fights mainly in the sea depth. Even after a very long and tiring haul. once it is pulled on board, and he will not be put to death immediately, he can throw himself at anything and bite wherever he falls, ruining the deck.

Like herring sharks, hammerhead sharks live in groups. They reach a mass of up to 100 Kg. They forage in groups, thus making it easier for themselves to get food. They are found near the headlands of the Atlantic islands, which thanks to the constantly blowing trade winds, are circled by strong sea currents. This species of shark eagerly lives on the border of these currents, e.g.. west of Madeira. The last of the "wild four."” is a loner – with – sea ​​fox. It has never been encountered in herds. Experienced anglers are looking for it. as well as the mackerel and herring sharks. The so far captured specimens of this species were caught in the summer, at a distance of approx. 10 nautical miles from land. The southern waters of the Breton coast of France between Brest and St.. Nazaire and the shallow waters of the Golf of Lyons are the surest fishing grounds for the sea fox.

With – the sea fox is revealing its presence from afar. His technique of hunting shoal fish is to circle the prey. Then there is a lightning attack, during which it stuns the fish with powerful strokes of its caudal fins). After all, all he needs to do is pick up the stunned fish. For this purpose, he needs a matting his mouth (characteristic of this species). Shark jaws – sea ​​foxes are incomparably smaller than those of the mako shark.

The sea fox on the rod literally goes crazy and puts up very strong resistance, often coming to the surface of the water. It also hits strongly with its large tail fin. There is no question of the planned catch of these sharks. but going out to sea in yachts
are equipped with equipment to catch them. Sharks, blue and polar, have one thing in common with the species described above – control of everything, what lives in the sea. However, hooked on the rod, they give up almost without a fight. There is no comparison here with those going crazy on a stick” mako. A weak temper is a big surprise, especially in the blue shark. also known as the man-eater shark. It is the most abundant shark on the European Atlantic coast. Off the coast of Ireland, He is always found in herds from England all the way to Portugal. Smaller individuals are usually found in large herds. This fish is characterized by a shapely and shapely silhouette. He has very sharp teeth, allowing easy tearing of pieces of meat from larger prey. The blue shark does not give up on its prey. It even attacks a human, which makes it especially dangerous. However, he sells his own life almost without a fight. This lack of sporting excitement led to it, that after the appearance of the blue shark in the tow, many anglers leave this place. It happens especially then, when small specimens swim. Little blue sharks, due to their unsuitability in the kitchen, are (after prior marking) released. Thanks to this method we can find out. that these sharks travel long distances in the waters of the Atlantic. In the summer, when the Colorado beetle stands high above the horizon, they even reach far north to waters with temperatures around 10 C.

The most interesting blue shark fisheries are off the coast of Portugal and extend from the Algarve to Lisbon (along the west coast). There are also Irish fishing centers like: Kinsale. Westport and Courtmacsherry and Looe in the south of Cornwall. In England there is even an association of shark hunters called "Shark-Angling-Club". Learning to catch sharks should begin with the blue shark. The polar shark is the least brave on the rod. Almost unbelievable, but even a record-breaking fish by weight 775 Kg. from the Norwegian fjord Trondheim, she was dragged out of the depth after a few minutes of hauling 300 m for "wet bag."”. With such little bravery of this fish, is quite possible, that a new record will soon be set in European waters – more than 1 ton shark on a line of strength 60 Kg. The gear used for fishing should comply with the criteria specified by IGFA (International Game Fish Association). It would be the largest European specimen, ranked very high on the IGFA record list. This fact makes fishing for polar sharks even more exciting. All specimens not exceeding the "record" weight return back to the sea. Releasing has to do with this as well. that this shark poses no threat (even for healthy fish). Ten „sanitariusz” nature always looks for sick animals, weak and thus cleans the water reservoir. This giant in the "black suit."” wanders from fjord to fjord in the darkness at a depth of approx. 250 m and is looking for food. Its menu includes seals, porpoises. waterfowl, but mostly fish. Norwegian anglers specialize in fishing at depths of approx. 300 m. during which they wait for days and nights to take the giant.
Almost sure” the catch is guaranteed by the fishing clubs in Trondheim. With adequate fishing patience, everyone has a chance to catch this shark in the vicinity of the Norwegian fjords. They are caught at a depth of approx 250 m moving north from Trondheim.

What to do with caught sharks? The blue and polar sharks have no culinary value, while the mako and the herring shark are highly appreciated by gourmets. The meat of these sharks is tender and tastes like veal.

With – the sea fox and the hammerhead shark are processed and sold in the form of "tuna loin or swordfish". All fishermen always enjoy catching every shark in the "wild four" group. It is very profitable for them.

Individuals belonging to the "lazy two” it mostly lets out. unless they are record specimens. Norwegian and Irish anglers worked with scientists to develop a shark tagging program. As a result, interesting results have been achieved in research on the life of sharks. After re-capturing a given individual, it is possible to determine not only the route of its migration, but also his age and achieved growth. Fortunately, times of fishing for sharks for the sake of earning their notched jaw in the form of a trophy are now a thing of the past.