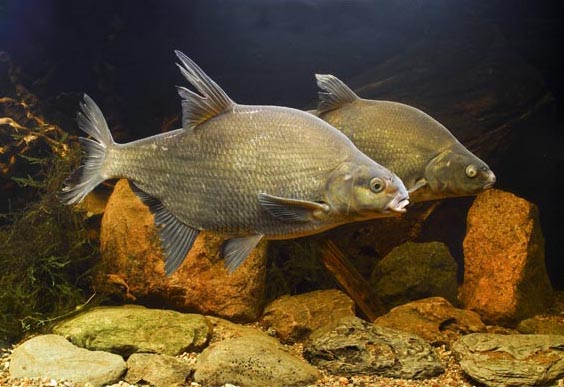 The first time you meet a bream, you have an impression, that he doesn't need to introduce himself. Actually, its specifically and, compared to other species, an unusually shaped body shell may resemble an open book, which can be easily read in what environment the bream can live in, what kind of food he likes best, how food is gained, what are his swimming qualifications.

Haste is not a good advisor and with a superficial assessment of the bream, under the impression of its complete awkwardness or even sluggishness, we would immediately exclude the possibility of its presence in flowing waters and assign it only standing waters. However, with a hasty sentence, we would offend him and unlawfully deprive him of many life opportunities. All types of deep stagnant waters, especially the more spacious ones, bream – of course – considers it his, at the same time, however, demonstrating its equality with other species, it demands living space also in flowing waters. However, from the sharpest steep sections of the watercourses – self-critical – avoids, in them he would have mobility problems; in a quieter current, however, it is definitely impossible to embarrass and feel at home.

The prognosis for the further presence of bream generally needs to be assessed with optimism. This is evidenced by, for example, the dynamics of growth in its catches, Thanks to which it is now permanently ranked second in terms of the number of caught specimens, right behind the carp. Unlike carp, which owes its place to the care of breeders, The bream stood out thanks to its own merits.

The extraordinary advantage of the bream – next to modesty and adaptability – is its unique ability to spawn on a variety of ground types, for example, on the grass, on the roots of trees and aquatic plants, on more delicate twigs, even on clean rocks etc., which enables it to reproduce in any at least somewhat suitable environment, so in most waters it is not doomed to the direct help of the breeder. Spawning takes place in May, at lower temperature only in June, always in more numerous groups and always "loudly" manifestly”.

Ultimately, however, the bream is not a perfect creation – the reputation of the modest is spoiled by his pickiness manifested in the choice of primarily animal food ingredients. In addition to this addiction, its specific shape, foldable, its small mouth gives it only limited possibilities of collecting small-volume prey, and only from the bottom.

The bream's food is therefore quite poor, both because of the small selection, and a limited foraging area. Attempts to compensate for the limitations of the accordion-shaped face with the ability to gather food in deeper layers of silt have only partial results. As are the attempts by bream to extend the season of food intake to the entire year, and therefore also for the milder winter.

In this situation, it would be more lenient to judge the low intensity of his growth (under average conditions 1 kg of weight does not reach until 8.-10. age). It is likely, that one of the reasons for its slow growth is an excessively high price, what he has to pay for a blissful sense of security, conditioned by the company of a large group of tribesmen. A consistently maintained family community leads to merciless competition in gaining food, and in extreme cases, excessive reproduction can lead to an increasing degeneration of the entire bream population in some types of waters. In most waters, however, bream can settle properly, a 4-5 kg individuals, even under average conditions, can be considered commonplace. In Germany, e.g.. the average weight of specimen fish of this species is 4,3 Kg, in Poland 3,2 Kg, in Hungary less – 1,9 Kg. In more fertile, the wide waters are inhabited by bream that reach an admirable weight 6-8 Kg. From old age, however, they may already be “covered with moss”.

The characteristic features of the bream have been deliberately exaggerated in the above information; the point is, not only to remember them, but even use them in fishing practice. Treating the common bream on an equal footing with other white fish can lead to the same fishing techniques being used. However, the rules for catching bream are separate in many respects, and in some respects even unique. Of this, what we have already written should follow, that bream can be successfully caught all year round, and because of his timidity he must be sought in the deep, in calm waters using only small lures, which fish can "find”buried in the silt.