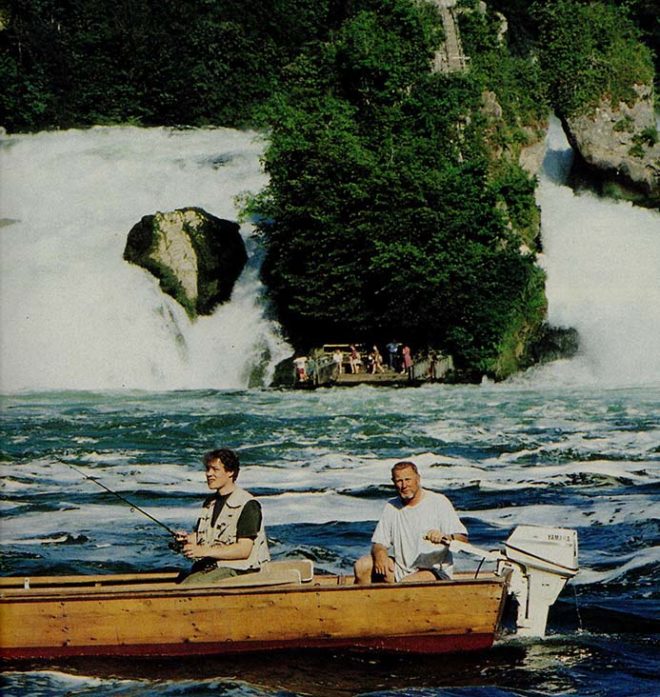 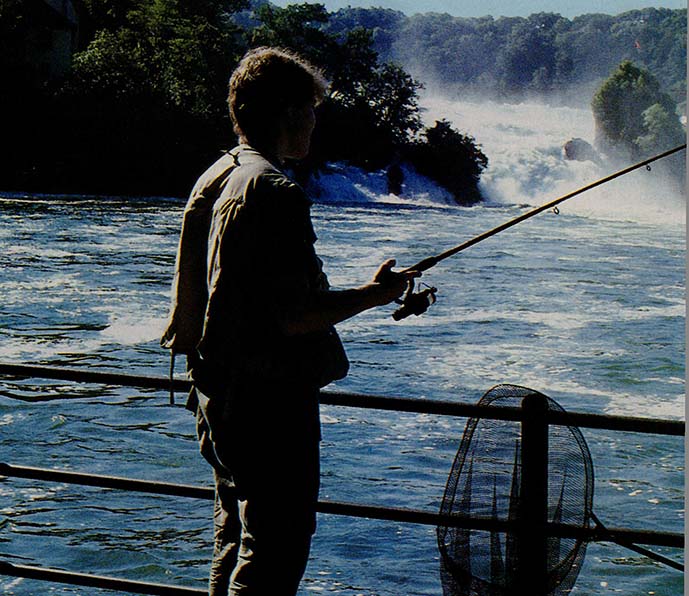 The Rhine waterfall in the Swiss town of Schafhausen is not only the largest waterfall in Europe, but also one of the most beautiful fisheries of various species of fish. Three visiting anglers can try their hand at this charming place every day.
The old lady wouldn't believe me for anything. She shook her head and looked at me with obvious indignation, while her poodle was unceremoniously sniffing my bait yellow Gouda. -Fishing is definitely not allowed here, young man! – You're allowed, ma'am, slow, you only need to purchase the appropriate permit. I perfectly understood the accusations of the old lady, because before leaving for Schafhausen I was also tormented by similar doubts. Go fishing under the most beautiful and popular waterfall in Europe? -It is definitely not allowed – my friend Klaus was saying – and if anything, it's at least a kilometer below the waterfall.

After inquiring, all worries flashed like a soap bubble. For the Swiss, the waterfall at Schafhausen is not a sacred cow, and the barbel is no banking secret, to be guarded like an eye in the head. Three visitors every day
anglers can purchase a special license for visitors entitling them to fish in the pool under the waterfall.
My friend Bernd and I are sitting almost at the waterfall, Tam, where is the walking alley (a small bridge) it comes to the river above the waterfall. Water dust is floating in the air around us, waterfall
roars, that you have to raise your voice. For half a day we laughed at the hilarious event, which happened the previous day. Bernd asked a tackle shop for "the biggest weight they have". The woman serving us disappeared somewhere in the back room and after a long moment, slightly bent with effort, put a 3-kg downrigger ball on the counter. – Is that enough? – she asked quite seriously. Ultimately, we bought an adequate stock of 100 gram weights (There were no bigger ones), though they turned out to be a bit too light anyway, for below the waterfall the water did what it wanted to them sometimes. Only when the line is constantly taut and the poles are bent low over the water, the weights lay relatively still on the bottom in one place.
There is no wonder why – we fished in the emerging current below the largest waterfall in Europe.
The water here falls from above 25 meters and spreads to a width of approx 150 meters. Every minute, approx 300.000 full tubs of water. 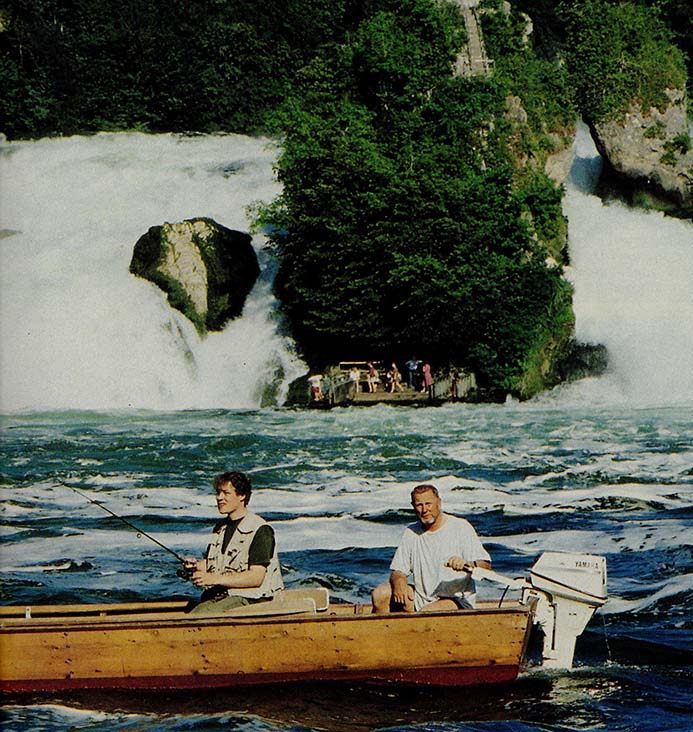 Fish, who stand in such a current are always wonderfully muscled. Anonymous, who quite quickly managed to jam the barbell, informs me, that he fights with the "muscle pack". We are looking at the tip of the rod. It bends almost to the limit. We hope for a while, that the fish is huge.
After picking up a kilo barbell, we are a bit disappointed. Bernd is kissing the fish anyway – this is his first barbell ever. And not the last one.
Hour by hour we catch more and more of these beautiful and very cautious fish. The strokes are very vigorous, however, the rod tip bends only for a moment. You'll let the line go a little, the stream of water immediately displaces the weight. You are waiting for a clearer bite, the fish lose interest in the bait. We are left with nothing else, as soon as every bend of the tip is clipped in no time.
In one good day, below the waterfall you can fish 30-40 fast. The largest fish are sometimes one meter long and weigh approx 8 Kg. The most effective lures in fast current turned out to be cubes of yellow cheese and worms.
Some angler stalks with a match stick and a Nottingham reel. I am trying to catch trout for the grub in the circulating water. Only the antenna of a large float is visible on the surface. A fairly large sinker holds the lure just above the bottom. In the evening, this friend proudly shows us a rainbow of almost one kilo.

Carps in the current

Another angler, a little lower with corn. He was ready to float for carp. We learn from the conversation, that it mainly catches carp weighing from 3 into 4 Kg. When fishing from a concrete wall, landing of a fish is possible only with a landing net with a very long handle.
Graylings are the best in Schafhausen in autumn. From October to January, they are caught with worms or maize on float rigs. The trick is to give the bait just above the bottom. If anyone wants, can also fish from a boat. Renting a boat for the whole day costs money in the fall 15 francs. We decided to fish from the boat only once. We were interested in the local trout. We were spinning with small wobblers in the circulating water at the height of the Worth Castle, reigning on a rocky peninsula.
My first bite was mine – and I was quite surprised, when out of the foaming water, instead of a trout, a nice chub's head finally appeared. Bernd also caught a chub over a kilo. – Below the Rhine Falls, everything is to be expected – comments on this catch by Werner Mandli, guide of our fishing boat.
– But – Bernd and I speak on command – the elderly ladies should not be forgotten either…

A daily license to fish below the waterfall costs money 15 Swiss francs. Renting a boat for one day in the fall is an expense for the next ones 15 francs. Boats and fishing licenses (also to other sections of the Rhine) is ordered via Fisch Beutler (Victor von Bruns-Str. 15, Tel. 0041-53-223050) w Neuhausen, directly on the Rhine.
Peter Beutler is an angler himself and is happy to provide information on the best spots and lures. You can buy 200 gram heavy current bottom weights from him.
Fishing periods: visiting anglers cannot only fish in winter, from 1 February to 11 Mark. If someone wants to fish in peace, he should, because of the many tourists, focus only on the early morning hours or go fishing in the evening (in the summer).
Information about accommodation: Tourist Service Schafhausen, Fronwawag Tower, CH-82201 Schafhausen, Tel. 0041-53-255141.