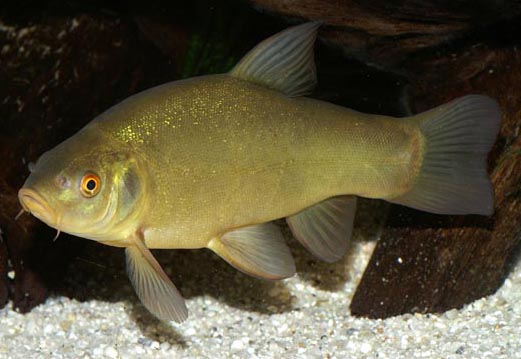 We usually only remember the lines then, when we want to "patch a hole" with it”, e.g.. when it comes to restocking silted and polluted waters, where another species will no longer survive. Lin is the undivided ruler of such waters. In other waters, with better quality, it must live in the shadow of the carp and other representatives of the fish community. The rope is considered to be muddy, shallow, overgrown stagnant waters. Under more favorable conditions, we cannot even imagine it. Actually, thanks to the exemplary ability to withstand even extreme oxygen deficiencies (of a permanent or temporary nature), lin is an exception among the representatives of our ichthyofauna and works well in very difficult conditions.

One of the rope's few weak points is its sensitivity to cold; however, this feature also needs to be treated with some reserve – e.g.. in the harsh climatic conditions of the Orava Reservoir, it fares better than in the warm South”. This can also be considered an advantage of the rope.

"Culinary taste”it is compatible with other cyprinids; the main component of its food are tiny beetles and their larvae, “Complementary dish” – young tender shoots of plants, seeds etc.. Lin has this advantage over other fish, that he knows how to carefully gather food from the deeper layers of silt, which other species are incapable of.

Lin is growing slowly. Even under good conditions, it gains weight 1 kg at the earliest in 6-7 age, usually even later. For this reason, pieces of weight can be considered as specimens 1-1,5 Kg, however, there are individuals over 4 Kg (in Germany the average weight of the medal ropes is 2,5 Kg). Ropes caught in Hungary 12 kg seem almost unreal.

Lin spawns at the latest of all fish, at temperature 21 -23 °C, therefore sometimes only in July, so that his fry by the fall barely reach 3-4 cm in length. It rubs heavily on the grass and is more prolific than carp. All warm lowland watercourses and their branches can be considered as the occurrence areas of the rope, as well as different types of stagnant waters in cooler regions, in general, however, we can speak of an occasional occurrence of this species.

This is also a reflection of our neglectful attitude towards the rope, that we have not yet developed a separate technique for catching it, and we are comforting, that the news about catching carp is enough here. There are certain affinities between carp and tench, but drawing conclusions from them for fishing is debatable. It would probably be wiser to establish the basic principles of tench fishing using the rich experience abroad.

The most convenient for the fishing line is the season – it follows from foreign sources, and in fact, that it is definitely a thermophilic fish – this is the warmest part of the fishing season. In some countries (Poland, Germany) in the period from May to August, you fish as much as 87% year-round amount of caught tench. The data from individual countries is exceptionally consistent, they can therefore be generalized.

The conclusions drawn from the comparison of the effectiveness of the lures are consistent with these data: confirm the carnivorous nature of the rope and allow earthworms to be brought to the fore as a universal bait, The 46% effectiveness. The effectiveness of other common lures cannot be clearly assessed due to the wide variation in the conditions of individual countries. The effectiveness of dough and groats varies considerably (medium 22%, in West Germany only 7%, but in the GDR as much as 26%) and larvae (average 12%, in East Germany only 5,8% and in Germany 28%). Potatoes give quite good results (medium 10%), bread (6%), and in Poland the pearl barley (17,8%). The bait set also includes e.g.. clam meat, pea, wheat and with unusual artificial flies and spinners.

The rope has no major problems with selecting probable positions. In each type of water, we look for it primarily in shallow waters, muddy, densely overgrown corners with heated water. Tench, Although, behaves calmly, but when searching for food, it releases gas bubbles from the silt, just like carp. Its foraging activity is also signaled by cloudy water or grass movement in some places.