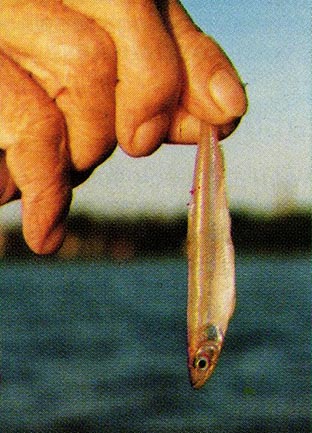 Wherever there is smelt, it turns out to be an excellent eel bait. Like sea trout, it occurs in a sedentary form, living in freshwater, and in the itinerant form, which during the mating season returns from the sea to freshwater reservoirs. In lakes, from July to October, smelts form huge shoals, followed by perches and large eels. The fact is somewhat surprising, that big eels chasing after smelt, more often than you might think, they hunt in the depths or swim below the water surface. For example, on the large Ploner lake, professionals catch eels swimming in the depths using smelt freshly extracted from the stomach of a perch as bait.. They move the smelt on a single hook up and down, just below the hunting perch herd. In Poland, it is forbidden to raise and lower the lure with a dead fish. This fish can also be used as an excellent bait at night. Unfortunately, only freshly harvested smelt is especially hunted. Fishermen know this too, putting their ropes on eels with hundreds of hooks, which they are putting on just smelt. The smelt is relatively difficult to catch. You can buy it in the spring at the fish market (its itinerant form). It's a good idea to freeze yourself some of this wonderful predator bait.